It was a cold, damp night on All Hallows’ Eve, as Mandy made her way through the dark streets on the way to her office. The city was a ghost town, eerily quiet due to the quarantine, and tree branches cast menacing shadows of long outstretched arms on the pavement.

Mandy thought she heard footsteps behind her, turned and stopped abruptly but couldn’t see anyone. An unhinged door from the building behind her creaked open and shut in a rhythmic taunt that was unnerving. As she turned back, Mandy gasped as a creature jumped out at her from the alleyway on her left, and as it got closer, she saw a black cat crossing her path. Mandy steeled herself as she saw her office ahead and made her way there quickly.

By the time she got to the door, she noticed that her hand was shaking and it took her a couple of tries before she was able to get her key in the keyhole and open the door. There was something – or someone – pushing against the door, making it difficult to open. Once inside, she flicked the light switch but nothing happened. It was pitch black. Suddenly, there was a crack of thunder followed by bolt of lightning that illuminated ghoulish shadows in the corners of the room. 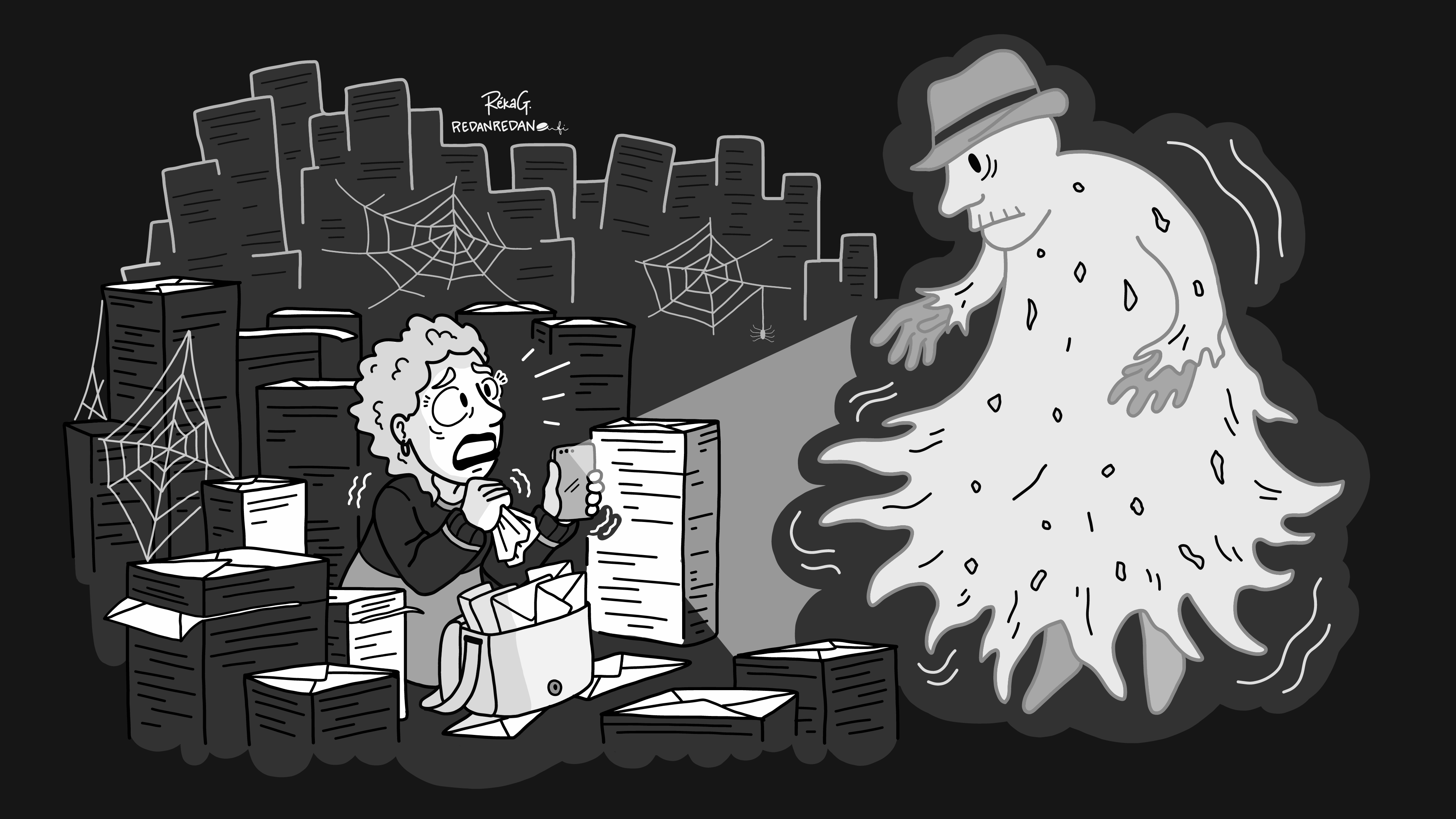 Mandy turned on the flashlight on her smart phone and one of the first things she noticed was mounds of envelopes on the floor, and she realized that many of them had been lodged against the front door, which made it so difficult to open.

She saw that these were invoices that had been piling up, along with a few threatening late-notices. This is what she came to get, and she quickly started to gather them up in her bag, which she realized wasn’t big enough to hold the volume of invoices strewn all over the floor.

Then, out of nowhere Mandy heard a whooshing sound that seemed to be circling around her. She held up her hands defensively and tried not to panic.  What she saw in front of her caused her to blink rapidly, but the image was still there. There was a translucent figure that seemed to come from nowhere. The bespeckled, pale-faced figure was coming toward her. She put up her hands to keep him away, but they moved right through him. She dropped the bag, put her hands up to her mouth and gasped.

“Who are you?” she stammered.

“I am the ghost of Halloween past, present and future,” the ghoul whispered.

“What do you want?” she asked warily.

The figure waved his hand and with that the room changed. Mandy saw a poorly lit room with a tiny window in the corner and several workers hunched over their desks. As she got closer, she noticed they had mounds of paper on their desks.

“This is where I used to work,” said the ghoul. “That’s me working in the corner.”

And sure enough, there was a younger, version of the ghost, who was pale and sickly looking, but alive nonetheless.

“This is what we did eight hours a day, five days a week,” he said.  “Opening and processing invoices. There were no computers, so everything was done manually. It was a tedious job.” 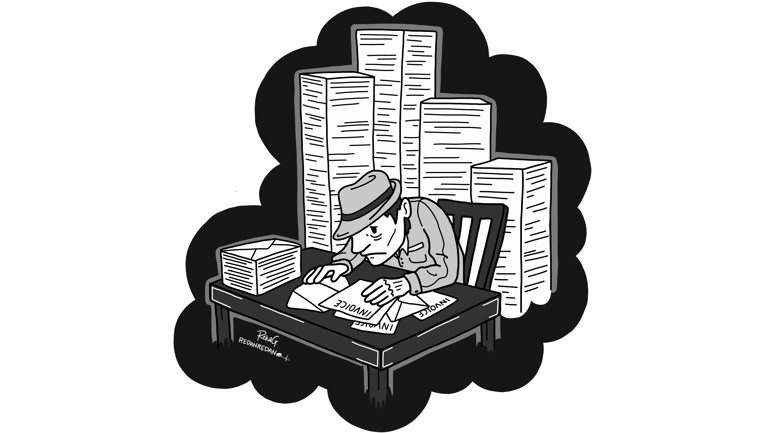 Mandy looked around and saw the listlessness on people’s faces. They were drawn and pale.

And with a wave of his hand, the scene was gone, replaced by the office she remembered from just a few months ago.

“Look at the employees now,” the ghost hissed. “While they have computers, they are still doing so much manual work. They have to key in all the invoices, chase down people for approvals, and process everything by hand.”

Mandy looked and noticed how unhappy and frustrated the workers seemed. She also saw that the piles of paper they were working on were even larger than the first scene. She overheard the conversation of one AP staffer who was getting an earful from a dissatisfied vendor looking for payment.

She saw the controller walk in, demanding information on invoices coming due – outstanding liabilities – so the company could better manage spend and cash flow and have accurate monthly closes. The AP staffer he was talking to looked frazzled and nervous. “Unfortunately, we just can’t get that for you,” the AP staffer apologized. “We have so many invoices that we are still processing and others coming back to us that have errors that need to be fixed. And, of course, there may be other invoices that are missing, misplaced or lost. I’m sorry, it’s impossible to know what our outstanding liabilities are.”

The ghost turned to her and said, “As you can see, there’s no visibility and limited control with your manual AP processes. It’s impossible to see all of your invoices, where they are in the process and know what your outstanding liabilities are at any point in time.”

“Also, the reason you don’t have lights now is that your company was late with payment, and you missed the overdue notices. And they’re not the only ones that you have paid late. You have unhappy employees and customers, and you’re wasting time and money trying to do this all manually,” the ghost added.

Mandy felt overwhelmed with despair. She saw how unhappy the staff, management and vendors were, and realized their manual AP processes weren’t working.

“I will take pity on you,” said the ghoul. “It’s too late for me, but there’s hope for a happier, more productive future for you, your employees and the company. Let me show you what a possible future could be.”

A way out and the path forward

And with that he waved his hand and they entered a new scene. What struck Mandy was how efficient everything looked. Gone were the employees hunched over mounds of paper, and instead she saw bright-faced happy employees at their workstations, and there was little – if any – paper in sight.

The same manager from earlier walked in the room and approached the same AP staffer, but this time with a smile on her face. “Bill, I want to thank you and the team for an outstanding job. With the data you provided, we’ve been able to get insight into the cash flow we have on hand and be able to take advantage of some business opportunities. I’m hearing the same from Treasury and Accounting – how your data has helped them manage more effectively. And, with the data you shared with Procurement, they’ve been able to consolidate vendors and take advantage of early payment discounts. Keep up the great work!” 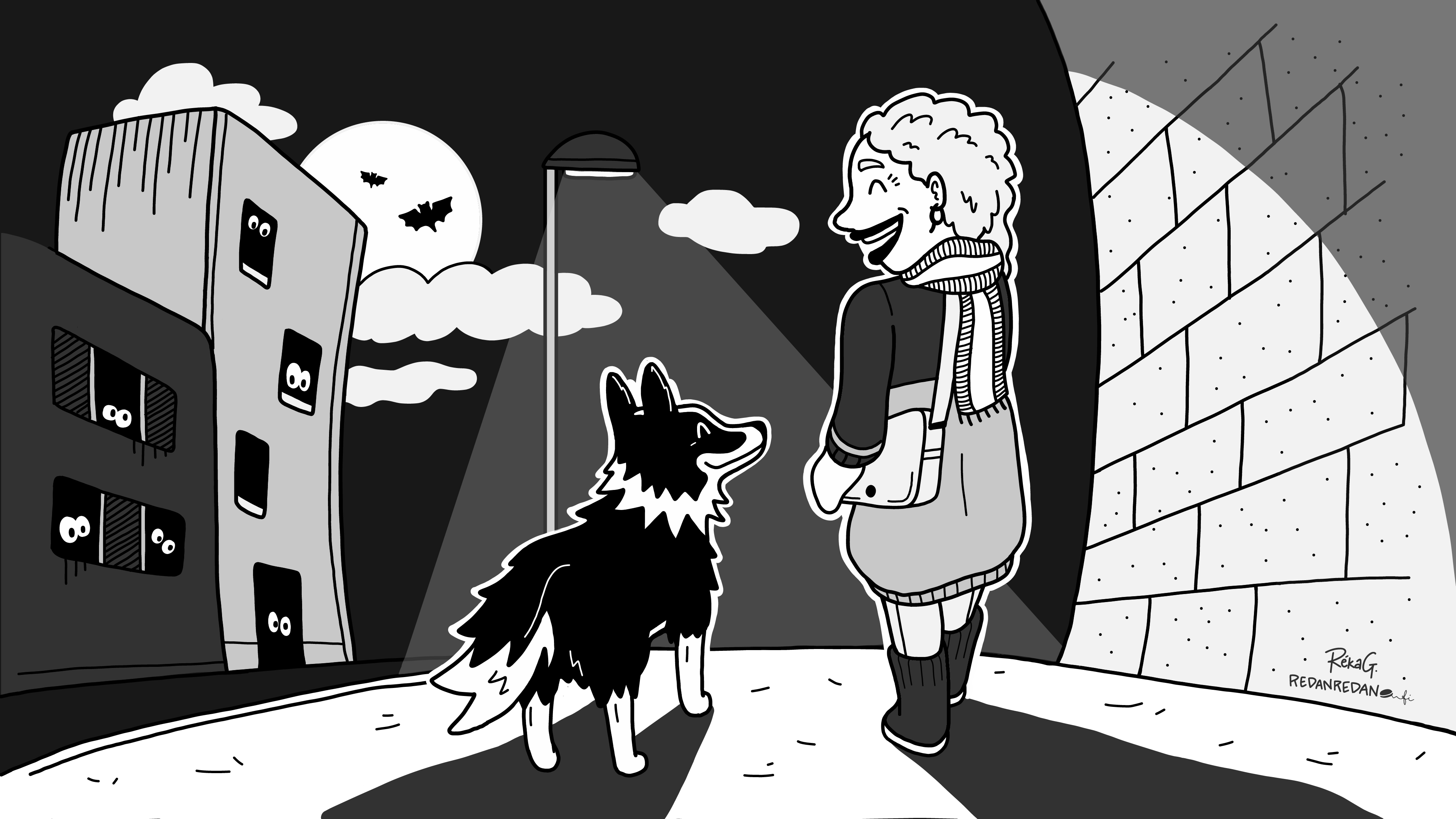 Mandy, turned to the ghost and said, “What happened? I want us to have this future.”

The ghost replied, “In this future, you are using an AP Automation solution. It allows you to know where every single invoice is in the system, who has interacted with it and when. It matches invoices automatically to POs, routes them to the appropriate approver, and manages the workflow. It removes paper from the process, reduces human error, helps prevent and detect fraud, and provides visibility, efficiency and control. With it, you are able to avoid late payments and fees as well as the problems that they cause with vendors.”

“That’s because they’re freed from tedious, repetitive work, and can now focus on exceptions as well as more value-added activities such as analysis,” the ghost replied.

“Wow. That sounds wonderful,” Mandy said. “How can I ever thank you enough?”

The ghost that looked so scary before looked almost humbled. He tipped his hat, and without a word, he disappeared.

Mandy thought how disappointed she was when it was her turn to go into the office and collect the mounds of invoices, and how scared she was earlier. It was certainly an unsettling night, but she left the office with a spring in her step. She had hope and now she knew exactly what she needed to do.

Want to stay pup-to-date for new Dooap Tales that are released?